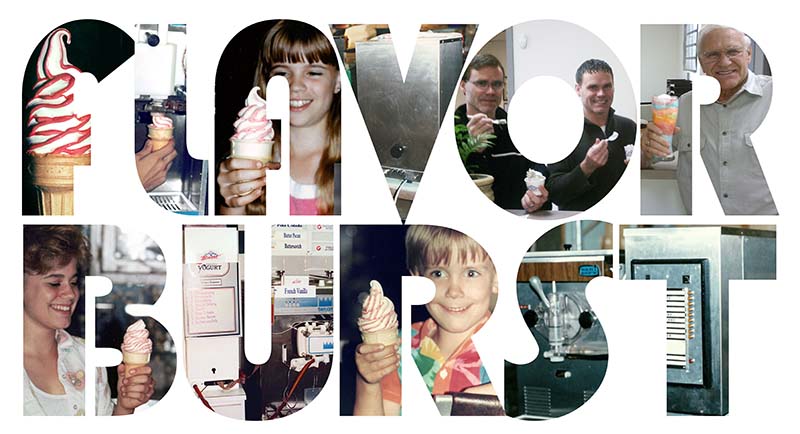 Flavor Burst has always been a family company, so it makes sense that the very idea they became known for was sparked during a family outing. In the mid-1980’s, Ernie Gerber and his wife Sharon, with their seven children in tow, went out to their regular after-church restaurant for a family meal. Finishing their meal with an ice cream treat, their daughter Mikki asked if she could have an ice cream sundae in a cone. At the time, the restaurant could only offer a vanilla serving in a cone or a sundae in a cup. However, after the fact, his daughter’s question stuck with Ernie.

Working as a sales manager, Ernie was often traveling for business and ended up utilizing his downtime while staying at hotels to work on this idea of a flavorful soft serve! Ernie eventually drafted an idea that would infuse a concentrated syrup into ice cream as it was being dispensed into a cone. This would eventually become known as the Flavor Burst system.

The earliest equipment tests were made with various parts machined and assembled in Ernie’s own garage. The initial idea was to pump concentrated flavoring into the ice cream stream as it was dispensed, blending it into a solid color. Ernie researched with ice cream freezer companies as well as companies that specialized in food chemistry.

The initial syrup Ernie tried out failed to blend with the ice cream. Instead, what was dispensed was something quite unexpected. The syrup collected on the outside of the ice cream stream. As it exited the star-shaped hole of the spout, the syrup was cut into sharp and colorful ribbons. The Flavor Burst prototype essentially striped the ice cream with syrup, instead of blending with it. This turned out to be a “happy accident”, as it not only had a striking and unique appearance, but the stripes of syrup were flavorful and delicious!

Several formulations had to be made in order to perfect the syrup. A special blend of stabilizers was needed for the syrup to gel perfectly once it hit the ice cream cone and prevent it from sliding off the ice cream.

The Flavor Burst Company is Born

At that point, Ernie knew his invention could be successful and decided to start his own company. Fantasy Flavors partnered with Ernie’s new business – each owning half of the Flavor Burst Company. John Ashley, the food chemist who perfected the syrup recipe, developed more mouth-watering syrups, including the fan-favorite Butter Pecan. Ernie’s twin sons, Tim and Tom, began working full-time for the company after both receiving their business degrees.

The system evolved over many years as technical quirks were discovered and resolved. Ernie expanded on the concept, engineering versions that would flavor milkshakes, slushies, frozen coffee, frozen cocktails, smoothies, and frozen carbonated beverages. Syrups had to be specially formulated to blend and not gel with these products. Electrical and programming changes allowed for multiple flavors to be selected, layering them in one serving. Now, not only can you have a sundae in a cone, as young Mikki wished, you can have a Banana Split sundae in a cone!

Where Flavor Burst is Today

Since then, Flavor Burst has grown and changed with the times, however remaining small has allowed us to continue on as a family business. Eventually, they established a partnership with Taylor Company, a large ice cream freezer company with over a hundred distributors worldwide. This global salesforce and service department helped introduce Flavor Burst to the rest of the world. Flavor Burst systems can now be found in “mom-and-pop” ice cream shops, convenience stores, fast food chains, bars and restaurants, and various places of entertainment.

Ernie retired at 81 years old and passed on his business to his twin sons, Tim and Tom. Tom eventually moved into the primary engineering role and Tim became the president of Flavor Burst Company. Many of the family’s children and cousins have grown up around the business and gone on to gain employment at Flavor Burst at one point or another.

Several family members still work there, along with long-time employees, who might as well be family. Ernie set out to find an answer to the simple question of a child and succeeded in creating Flavor Burst, a fun concept recognized by ice cream fanatics around the world. 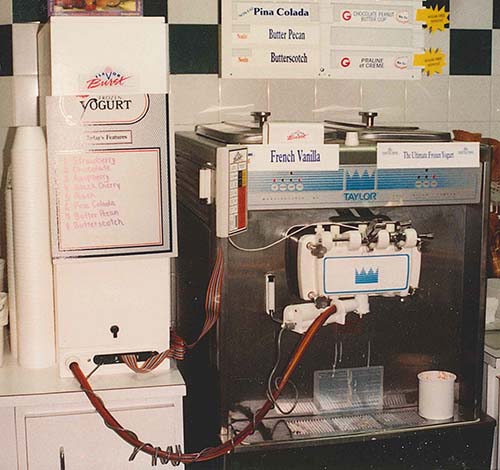